Photoshop, Stop Motion Studio, iMovie, MoistureProof Pager Bag, Transparent Plastic Straws, White Latex, 502 Adhesive, Paper Tapes, Markers
Problem
Compared to the extensive education of other science subjects such as physics and chemistry, Chinese teenagers fall severely short of fundamental geology education. This situation has affected their behaviors about environmental issues, such as carbon emission in daily life, causing a negative influence on the environment.
Solution
Aware of the problem, I decided to utilize the academic knowledge gained from my previous major to design a project about carbon circulation, aiming to popularize geology basic concepts and fundamental facts, as well as to change people's mindset and promote more environmental-friendly behaviors. 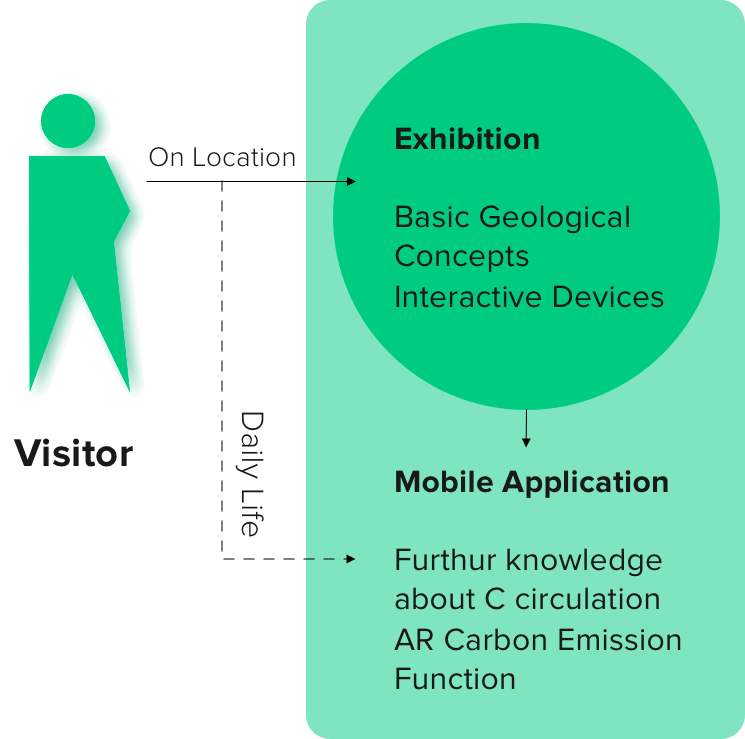 The project consists of two main parts:
During the exhibition, visitors could be impressed when interacting with the devices which vividly visualized carbon flow around the globe. In addition, the mobile App allows visitors, after they left the display, to consistently recap what they have learned. The AR function of the App also makes it possible for visitors to explore carbon emission in their own life. 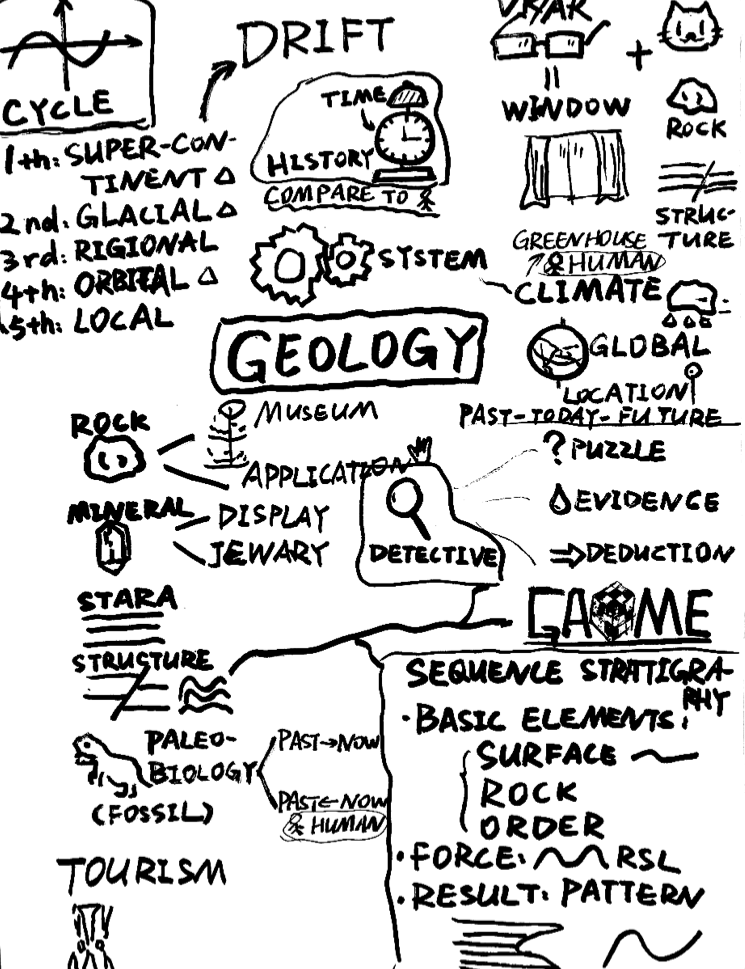 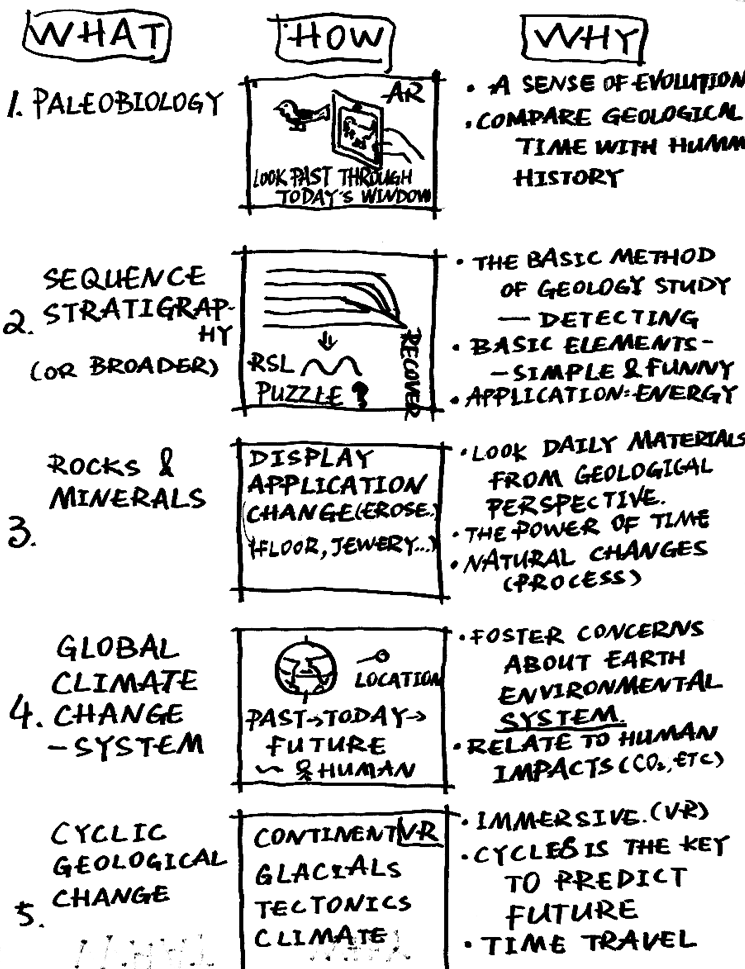 Fresh Ideas
Based on the concept map, I generated tens of opportunities and narrowed them down to six possible candidates. Following rules were set and obeyed to assure the effectiveness of the idea in popularizing geology basic concepts:
In this way, the design could also serve as inspirations to change people's behaviors to a more environmental-friendly way. ​ 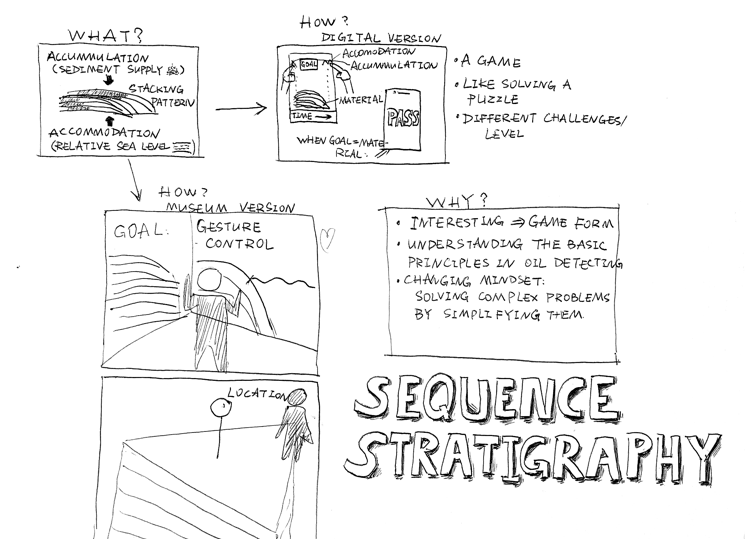 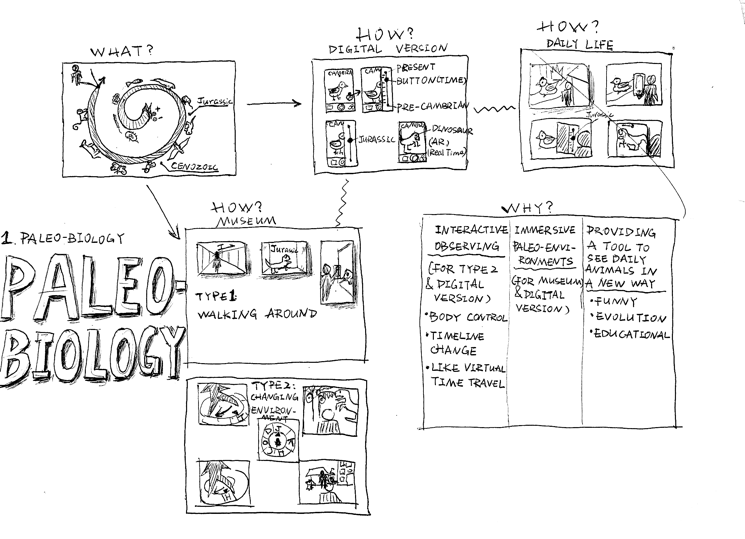 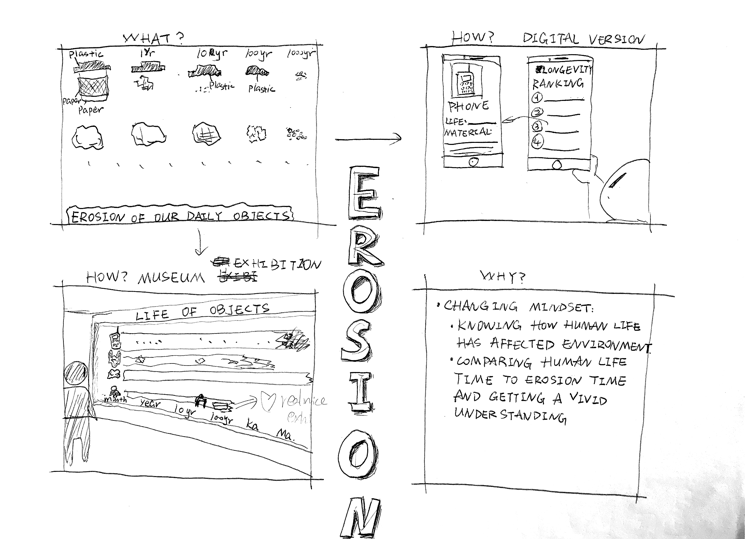 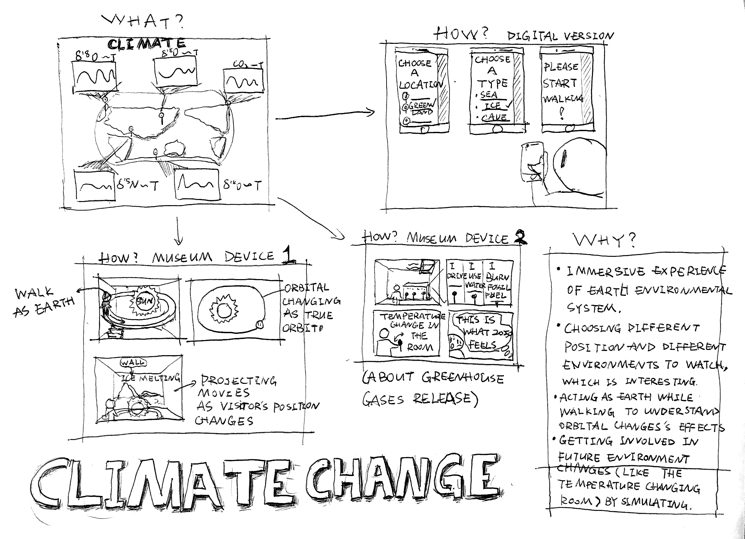 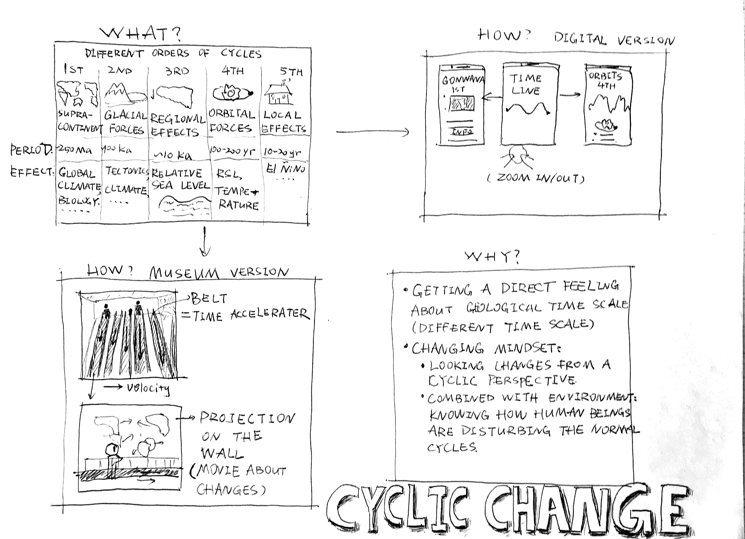 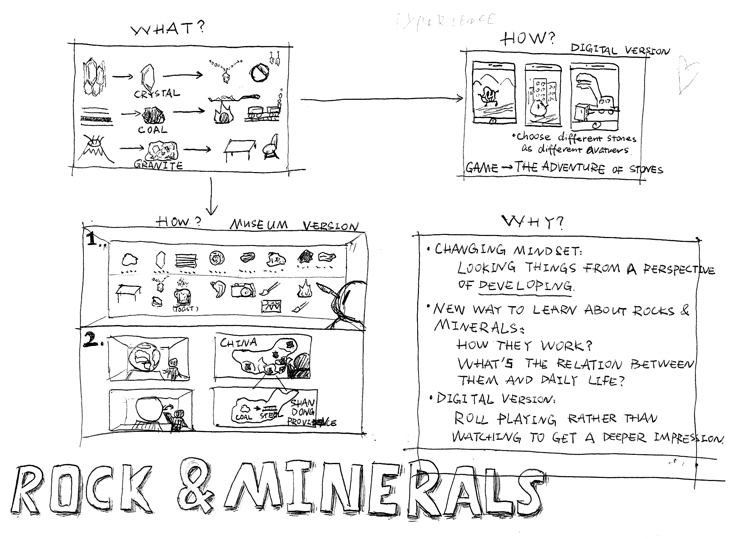 Through synthesis, I extracted the similarity of six ideas to aggregate their strengths. They all focused on:​

The enormous timescale of geological history and man-made interruptions of the environmental evolution on Earth.​

Compared with Earth's geological history, the history of human beings looks no longer than a dot. However, humans can make huge impacts on the environments in the future due to the industrial revolution and explosive development.​ Therefore, I chose Carbon Circulation from Climate Change, which had the most meaningful significance, as the major idea. Besides, I also borrowed from the other five ideas.​
‍ 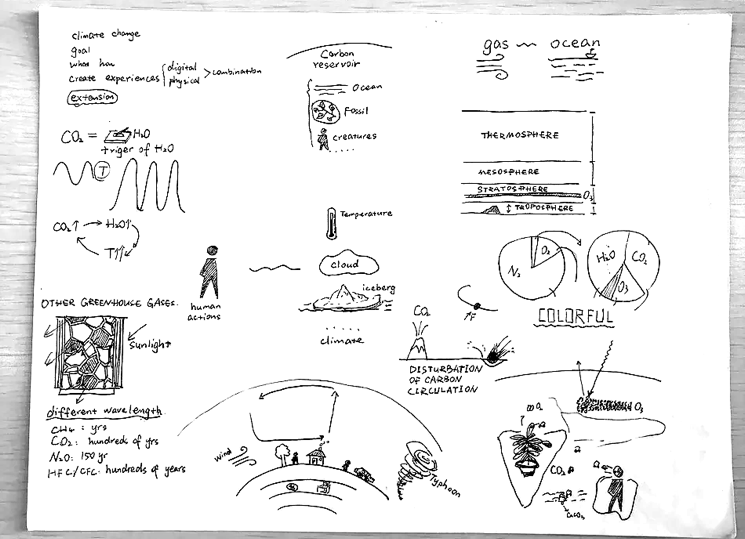 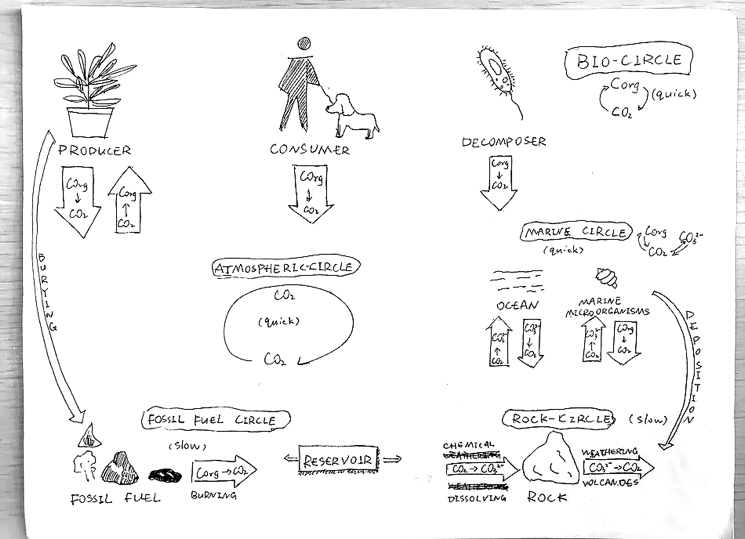 Layout
First of all, I refined the concept of Carbon Circulation and organized the contents I would like to present as:
‍ 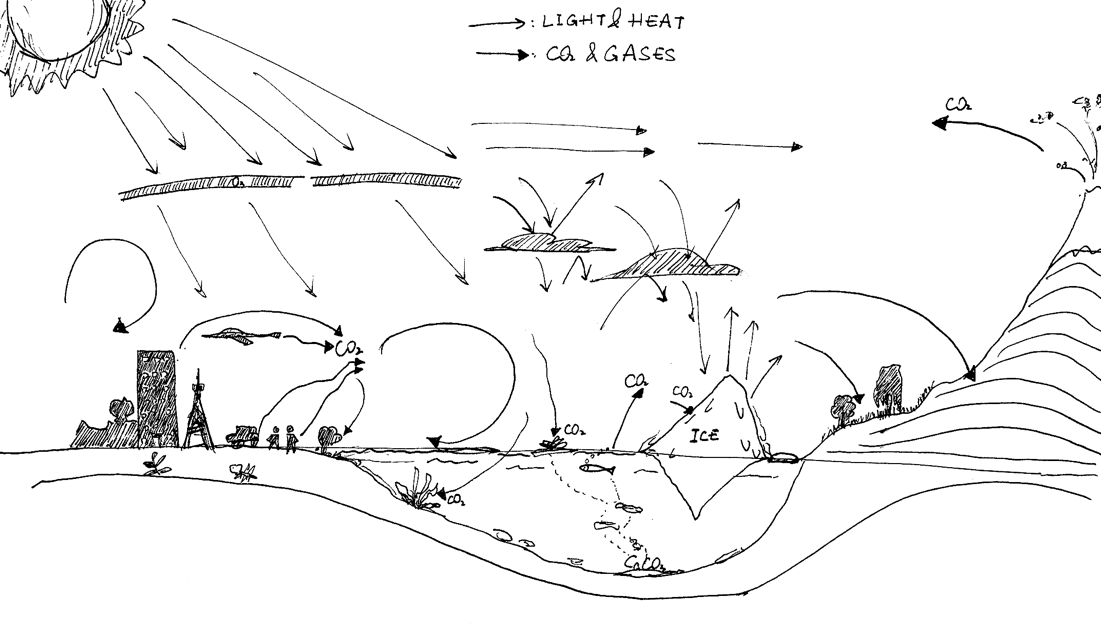 The following two design questions were well defined before moving to the next stage of detailed design:​

How could the project impress and attract people to further studies with basic geological concepts and fundamental facts about Carbon Circulation?

How could the project change people's mindset to do more environmental-friendly behaviors by making them consistently recap the experience?​
‍
For the first question, I designed an exhibition themed Natural Carbon Circulation Around The Globe. Basically, this contains the fundamental information about simplified and abstract global C-circulation pattern. Interactive devices were used to involve visitors in the circulation and in this way leave a deeper impression. Then I evaluated the initial design and asked experts for advice. After a few revisions, I made the final version of exhibition design in the sketching style and used a paper model as well as an animation to illustrate how it works.​

For the second question, I designed a mobile application containing further information demonstrating each part in the C-circulation, and functions exploiting AR technology to show daily Carbon flow in normal life. The mobile App could serve as an extension of the exhibition, which could be downloaded by scanning QR code at many places during the exhibition. By playing with the app after visiting the exhibition, people can frequently recap what they have learned before and been consistently encouraged to live a low carbon life. I made the Information Architecture and a few screen designs for the App and combined it in the animation to show how people can get connected to it and be affected when using it. 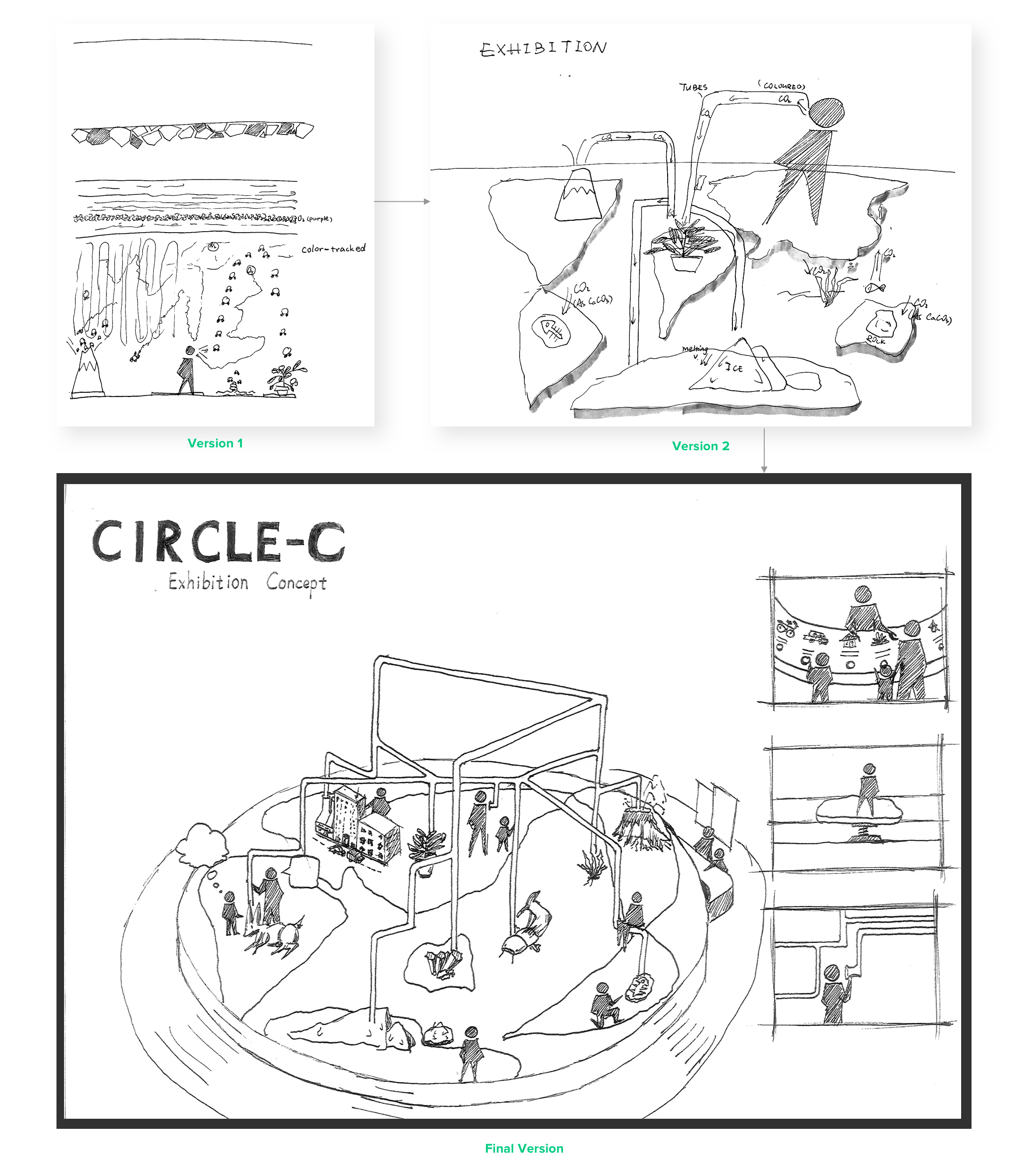 The storyboard below illustrated the journey of a woman and her child throughout the exhibition and its accessory mobile App.
‍
For the animation video, CLICK HERE to scroll up! 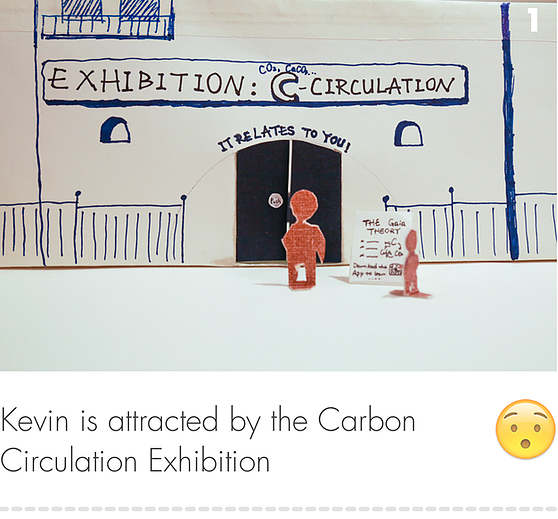 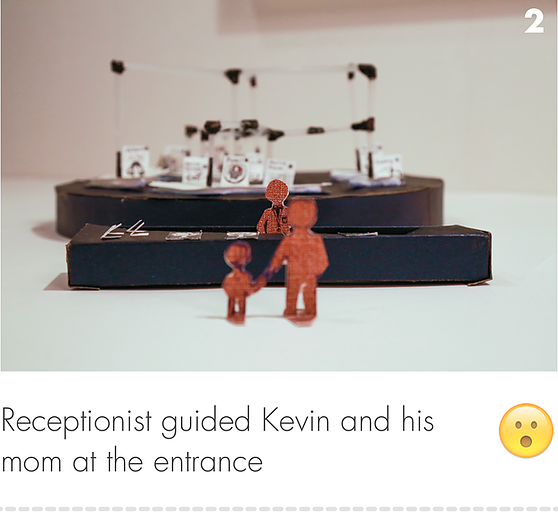 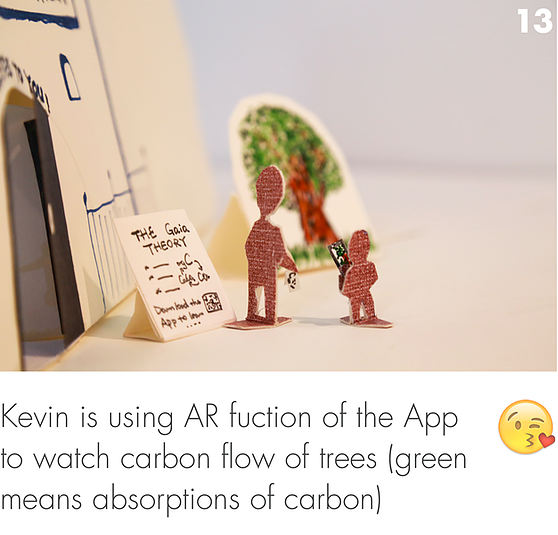 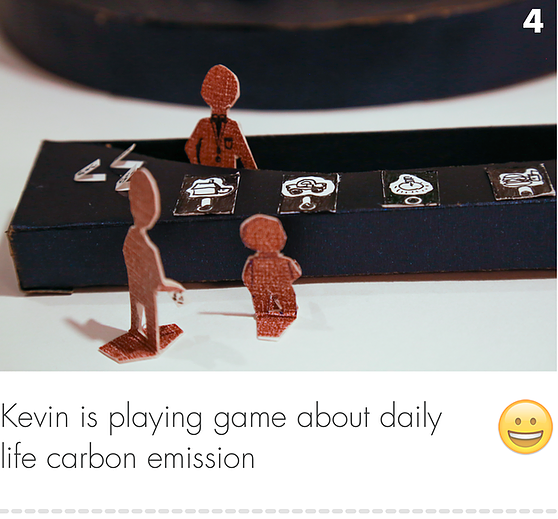 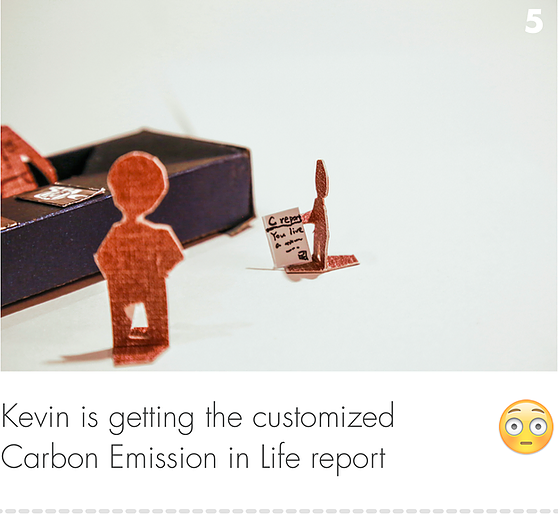 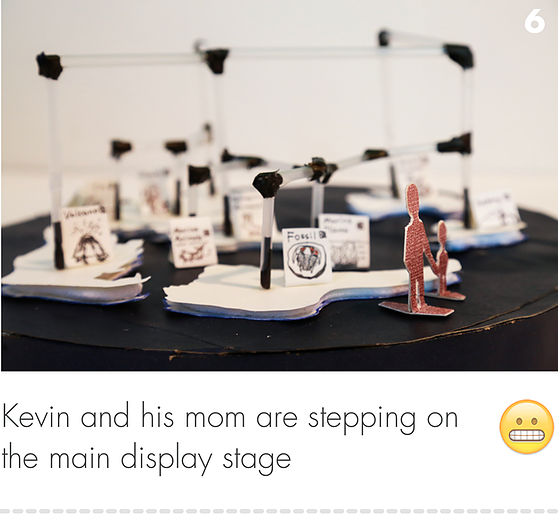 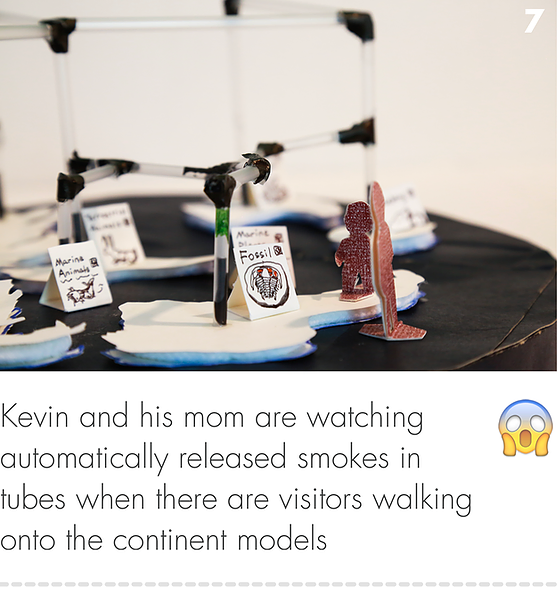 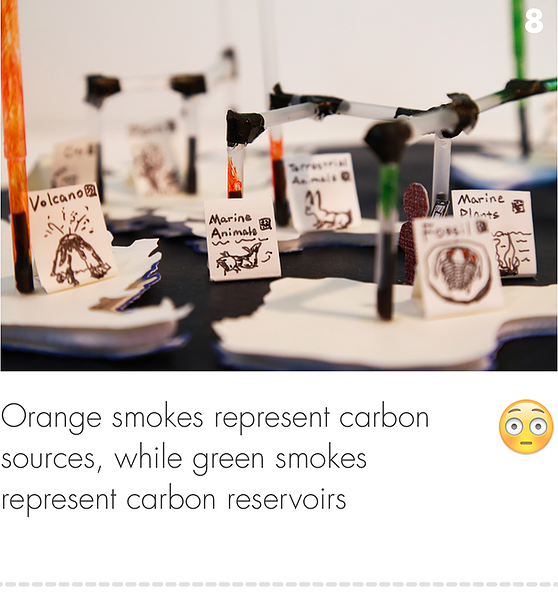 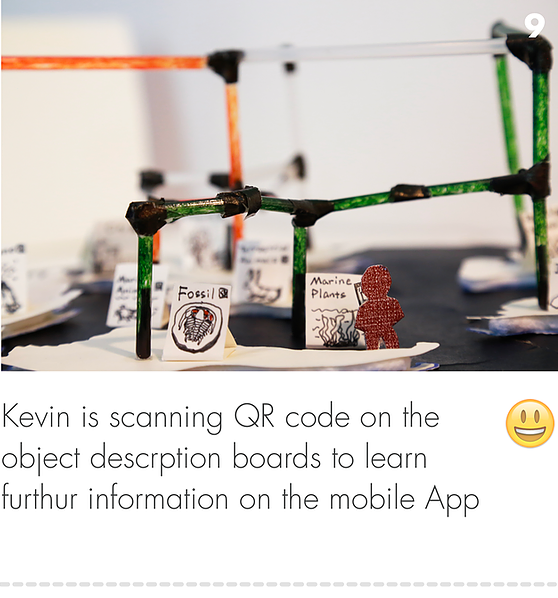 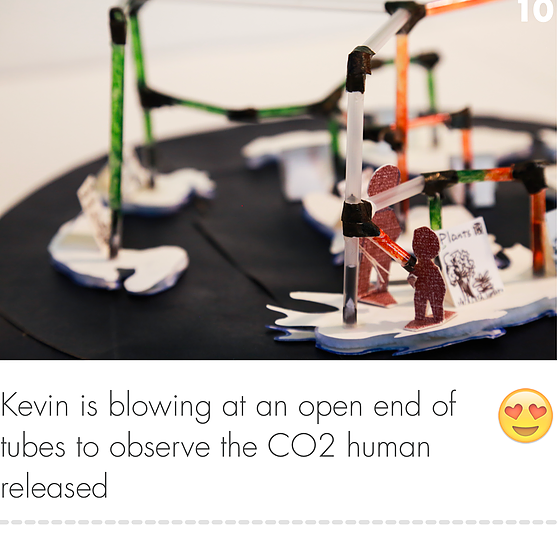 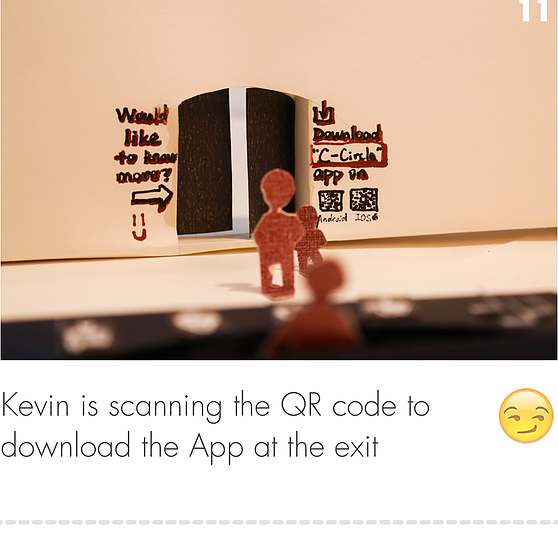 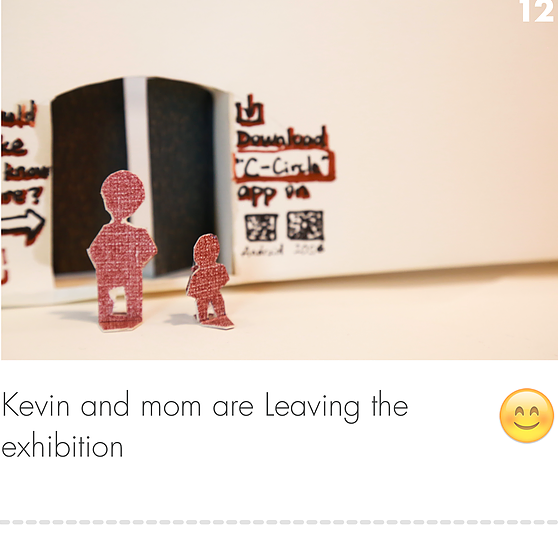 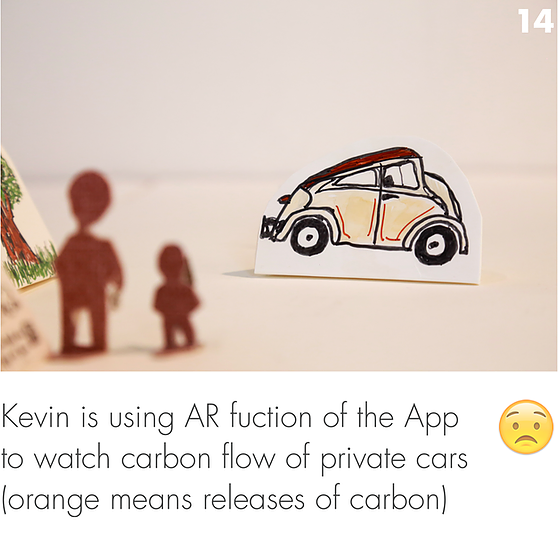 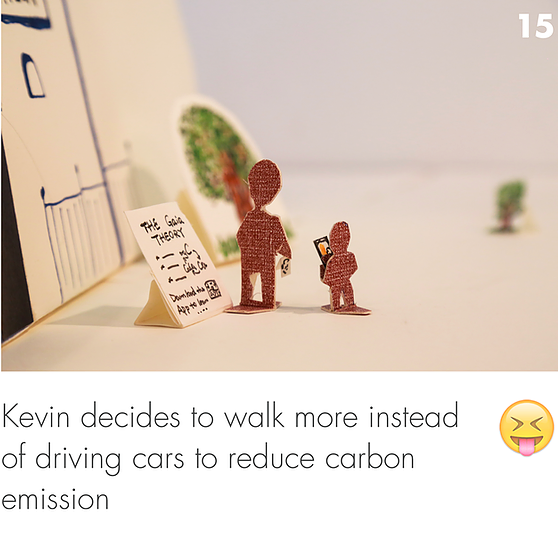 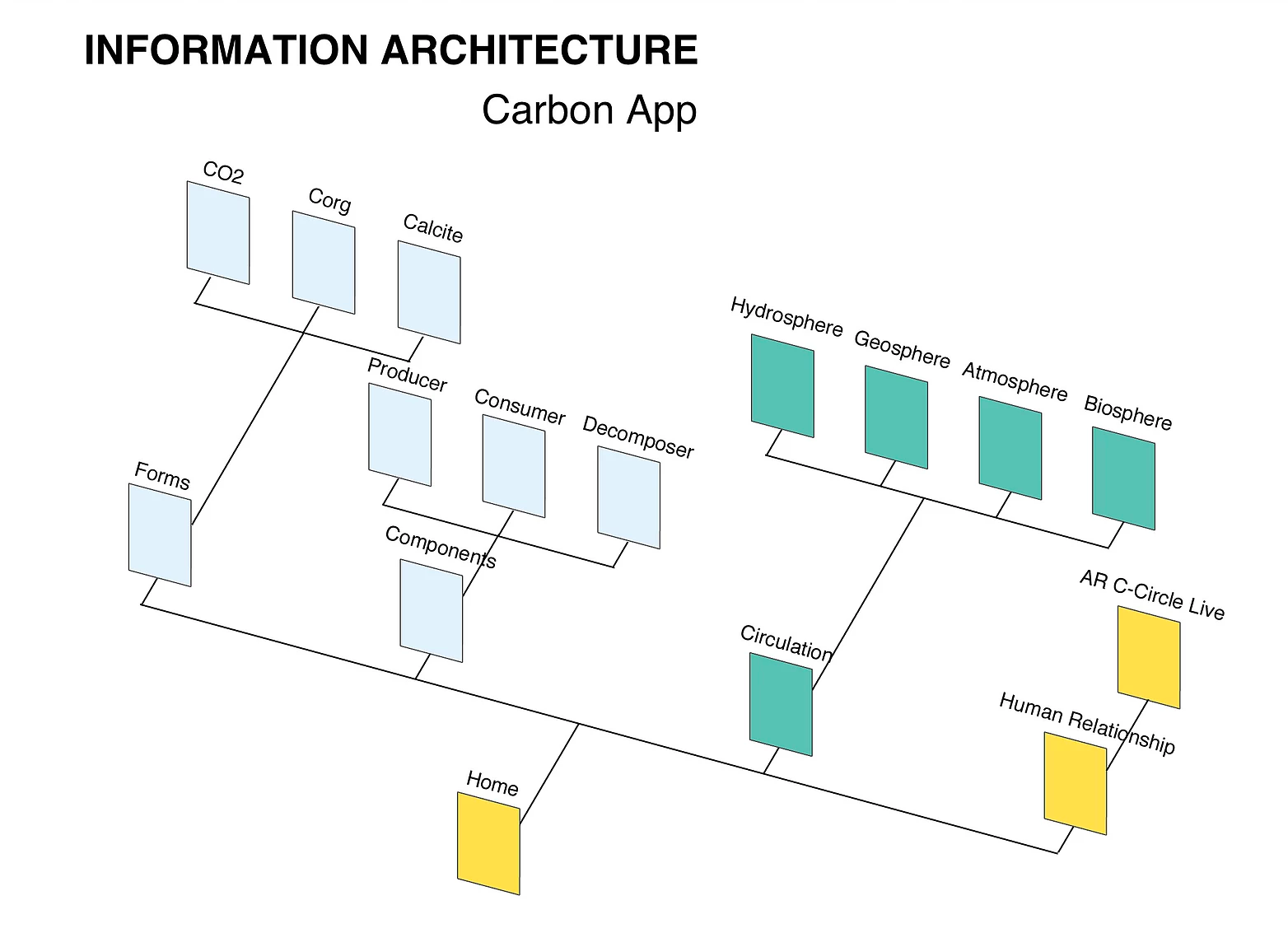 462 photos were shot at the same, controlled light condition. Then, I used Photoshop to calibrate the colors of the photos. I also learned the professional software, Stop Motion Studio, to make them move. Finally, I added scripts and voice to the animation by iMovie.
(*This was the first time I acted three characters at the same time in a video! )

For the animation video, CLICK HERE to scroll up!
WORK BY TYPE
DesignBuildExperiment
DROP ME A LINE
EMAILLINKEDINGITHUB
Designed and coded with JS, CSS, HTML and ☕️.
© 2017-2019 Chunhan CHEN. All rights reserved.